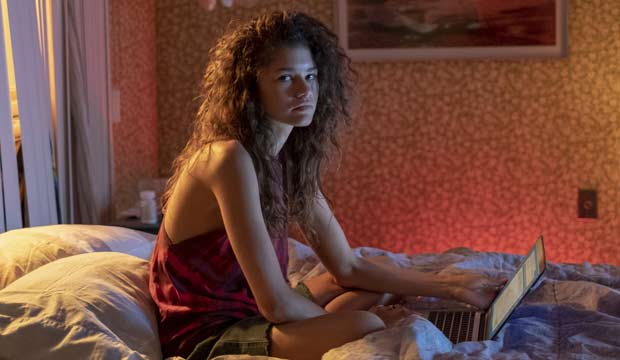 This show takes the terror and tragedy of coming-of-age drama to the next level with an unflinching dive into the icy, bleak darkness of being a teenager in 2019.The show stars former Disney sensation Zendaya as Rue, a teenage girl bent on drugs and self-destruction in her need to escape the oppressive sadness and anxiety that’s followed her throughout her life. Rue, we’re told, was born three days after 9/11, a Gen-Z stand-in who’s entire existence lives in the shadow of America’s great 21st-Century tragedy.

Rue spent the summer in rehab after an overdose, which almost cost her life and fractured her relationship with her little sister, who discovered Rue in a pile of vomit and saved her life. Their fragile, slowly mending relationship provides some of the show’s best material, and while Zendaya is terrific throughout, she’s never better than when’s she’s playing a scene where Rue is with her family, or pondering the damage she’s done to them.

The other series standout is Jules, a trans girl who’s new in town and proves a kindred spirit, instant BFF, and possibly something more to Rue. Chronically attracted to older, repressed men, Jules gets tangled up in a spectacularly soapy, tangled romance through her continual search for love on dating apps.

Elsewhere, The Kissing Booth heartthrob Jacob Elordi gets to dig deeper as the dangerous, emotionally unhinged chauvinist jock Nate, who only runs scalding hot or icy cold and tends to deliver both emotions through violence or sex. The former jumps out at unexpected moments in some genuinely shocking, chilling ways. The latter usually involves Maddy, his on-again-off-again bombshell girlfriend who has some dubious morals of her own.

It is not an easy show to like right off the bat, especially when each new scene cascades into some darker circle of teenage hell; graphic statutory rape, copious drug use, self-harm, and overdose. And then there’s all the nudity. Yes, as you’ve no doubt heard by now, Euphoria features a staggering amount of male frontal nudity. It’s all supposed to be shocking, and occasionally it actually is.

As the series wears on, it also finds more time for standout supporting characters. That includes Cassie, a high school girl in a relationship with a college freshman who struggles to navigate her sexual desires and her public image, and Kat, a plus-sized beauty who’s ridiculed at school but discovers sexual empowerment online in ways that are sometimes disturbing, but undeniably realistic.  Euphoria turns an uncensored lens on the dark happenings of teens in suburbia, refusing to edit out the sex, drugs, violence, and mental health that plague the human condition, even for teenagers.

Episodes; 7;will be complete with 8 (the last episode airs on 5th August)