Spectral is a $70 million military action movie released exclusively on Netflix. Given that it has been trending for quite a while now, the buzz behind Spectral seems to be driven by it’s unique story.

The US military is fighting a war in Moldova and is incurring heavy losses. They suspect their opponents are using camouflage and enlist the help of a researcher Dr. Mark Clyne to determine what exactly is going on. Clyne is an inventor of  spectral imaging googles for soldiers used to identify the enemy – it’s more advanced tech than infrared and can pick out anyone. In real life, its the same technology used by Seal Team Six to snuff out Osam Bin Laden when he captured.

Clyne’s job is a tough one in spectral: Go to the war zone and accompany the soldiers and try to identify what exactly they are seeing. Reports  coming though from soldier’s cams just before they are killed of some strange sightings….things that seem to come out of nowhere and attacking them…some…apparitions….that look like…GHOSTS!

How do you fight ghosts? Spectral shows ingenuity in a scary bullet filled way…being ambushed by beings which run atop buildings and though walls and that you cannot see with your naked eye…spectral makes for some intense viewing.

Arguably the best scene comes when the soldiers make a plan to ambush the apparitions on a bridge. This fight scene is a gem, a masterpiece…it looks so good that I’ve put the video below. 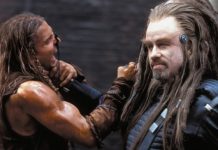 Is Battlefield Earth really the worst movie ever?