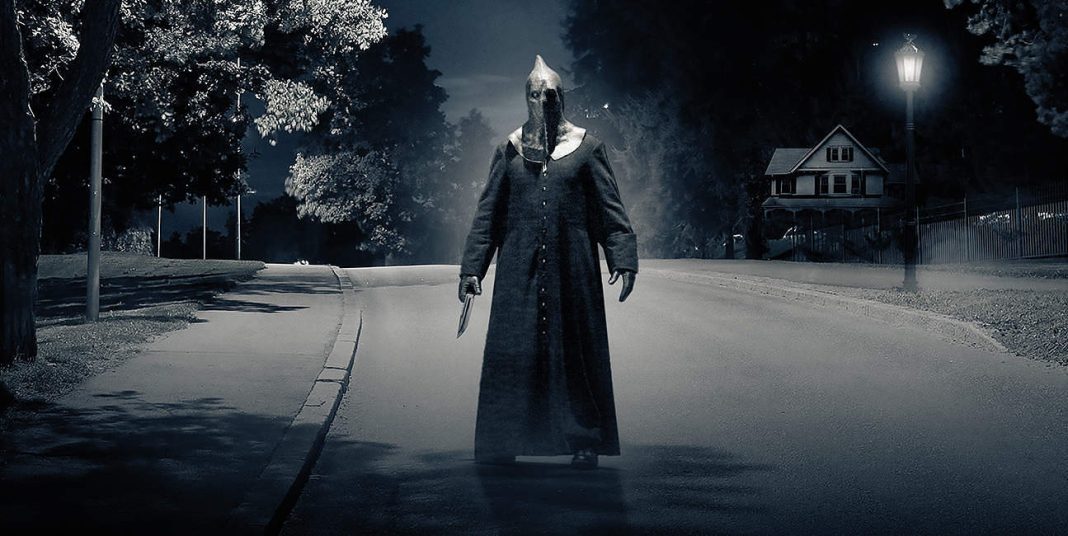 “Slasher” is a slasher show, (Smile) what did you expect?

The slasher genre involves a lot of slashing. There is blood, gore, and a guy wielding a weapon that can, wait for it, slash. Well, at least that’s my definition. This particular thriller from the Chiller network (it rhymes) begins with the brutal murder of a married couple on Halloween night in 1988. A man dressed in an executioner’s outfit hacks the man and cuts open his pregnant wife’s stomach, delivering the child in the world’s most brutal caesarean. It’s the best way to begin a slasher show. Cut to the present day, and the newborn baby has grown up into a beautiful 28-year-old woman named Sarah (Katie McGrath).

She and her fiance have decided to move back into the house where her parents were murdered. It seems like an idyllic town with interesting people but soon after Sarah comes home the executioner begins killing again, beginning with their rude, nosy neighbour. The problem is that the executioner is already in prison, so the new killings are being committed by a copycat or his student. To make sense of the seemingly senseless killings, Sarah goes to her parent’s murderer to ask for advice. That’s as good an idea as Will Graham asking Hannibal for advice.

Like many films and shows in the slasher genre, there isn’t much of a storyline. “Slasher” is not that different in this regard. The storyline feels weak, and the characters are not very interesting, but the blood and gore more than make-up for it. In any case, it would not be a slasher show if there wasn’t at least one character dismembered or murdered by the end of each episode. If you want to watch a show that gives you blood and gore as well as a complex and intriguing storyline, I suggest you watch “Hannibal” and leave “Slasher” to the fans of the genre.