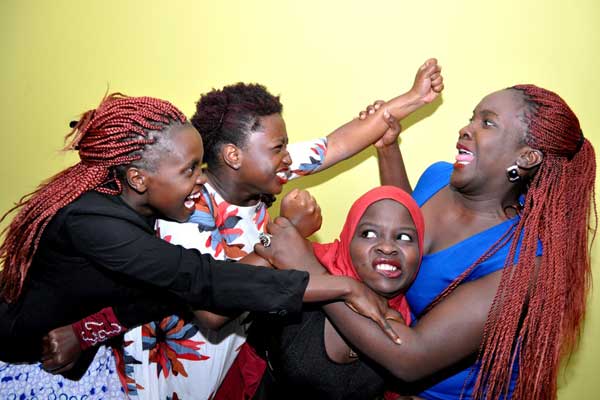 The Real Househelps of Kawangware continue to create more drama for themselves and their neighbours.

Last week’s episode saw everyone caught up in the drug-selling hustle falling even deeper into the trap. Amina (MCA), Doc, Njambi, Onyi and Tsipixi are all clearly caught up in the illegal sale of medicinal drugs. And although Doc appears to have grown a conscience (or perhaps he’s just looking out for himself), it does not look like he’ll escape whatever explosive consequence awaits. Then there are the poor folks like Njuguna caught in the crossfire. Remember when he got high and ran over that guy with Tsipixi’s car?

I was quite surprised to find that Doc is not the pushover you’d think he is at first sight! He handled Tsipixi’s threat very well. In fact, he was being sassy through the whole episode. Go Doc!

I think we can all say that no one was surprised when Matilda was the one who took the news of Njambi’s “unfaithfulness” to her ex-boyfriend, Njuguna. They do say that hell hath no fury like a woman scorned.

And of course, let’s not forget the closing scene. Tsipixi’s worst fears came true; he was kidnapped. Now all we need to find out is: were the kidnappers sent by the Nigerian who owns the car? Or were they completely different people altogether?

Favourite quotes in the episode:

• “Kwa sababu umekanyaga mandizi kwa soko, ikakuleta hadi hapa” – Njuguna
Loose translation: “You must have stepped on a banana peel and that’s what has brought you all the way here”
This quote made me think of the Kiswahili proverb: “Akufukuzaye hakwambii toka” (Loose translation: He who wants to chase you away doesn’t actually ask you to leave). Only Njuguna could have thought of putting it like this!

• “Kwanza iyo chum ni ile ya Kifaransa” – Matilda
Loose translation: In fact, that kiss was of the French type.
Matilda knows how to rub salt in a wound.

• “Sijui mbona naona traces za kiDelilah kwa huyu msichana. Itabidi nimemtoka, vile Eurobond ilitutoka”- Doc
Loose translation: I don’t know why I see Delilah – like behaviour in this girl. I’ll have to get away from her, just the way Eurobond got away from us.
Talk about Biblical and political allusion all rolled up in one sentence! That is one of the markings of an average Kenyan’s speech.