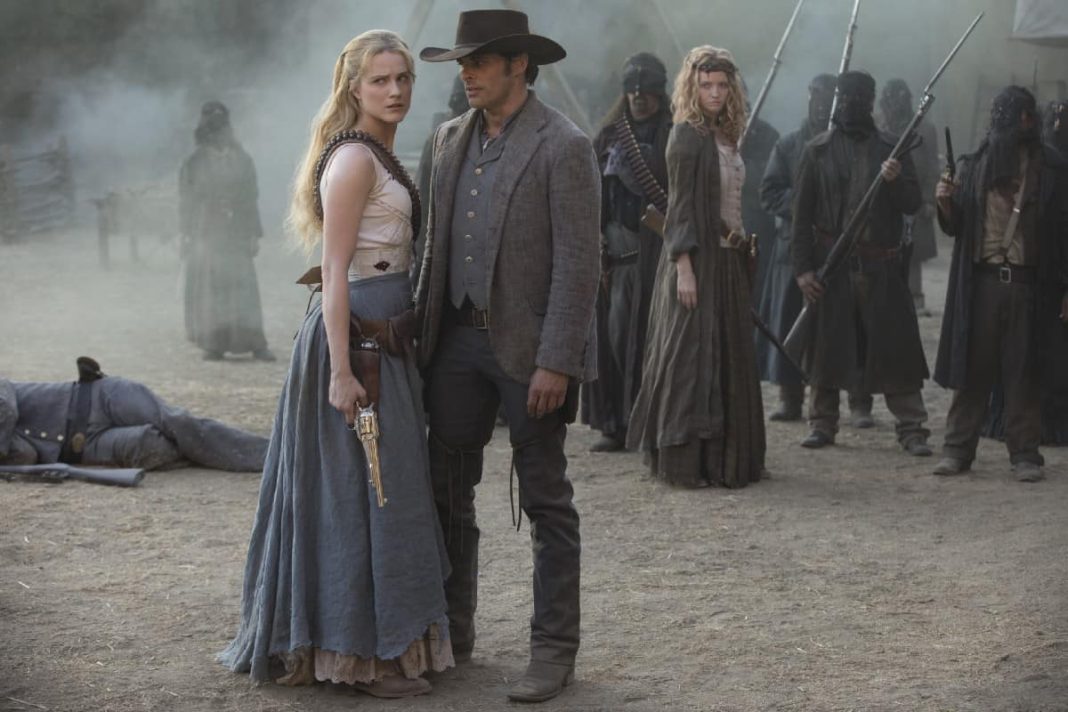 In an unspecified time in the future, Westworld, one of six theme parks owned and operated by Delos Inc., allows guests to experience the American Old West in an environment populated by “hosts”, androids programmed to fulfill the guests’ every desire. The hosts, who are nearly indistinguishable from humans, follow a predefined set of intertwining narratives but have the ability to deviate from these narratives based on interactions they have with guests.

The hosts repeat their multi-day narratives anew each cycle. At the beginning of each new cycle (typically following the host’s “death”), each host has its memories of the previous period erased. This continues hundreds or thousands of times until it is decommissioned or re-purposed for use in other narratives. For guest safety, hosts’ programming prevents them from physically harming human guests; this allows guests nearly unlimited freedom to engage without retribution in any activity they choose with the hosts, including rape and murder. Staff—situated in a control center called “The Mesa”, which is connected to the park through vast underground facilities—oversee daily operations, develop new narratives, and perform repairs on hosts as necessary. Unbeknownst to the staff, a small group of hosts have retained memories of their past “lives” and are learning from their experiences as they gradually start to achieve sentience.

I don’t understand people who ‘get’ Game of thrones but have no idea what is going on in West world. A lot of people give up on this series because they do not understand it so for their sake,here is what goes on…

So, today, if you want to take a vacation, you go to Mombasa or the UK(let’s not leave the 1% out), right? okay, we have established that. Let’s say you are filthy rich, and you have traveled each part of the planet, and you are now seated in one of your condos, in an island somewhere bored out of your mind, looking for something fun to do since there is no more to see in this world, and you hear through the grapevine of a realistic world that can be created to suit any desire you could possibly cook up in your privileged head…interesting🤔🤔. What do you need to do?you ask? Just show up with a cheque book, the weirdest desire, pick a host (A host is a lifelike ‘robot’. It acts,feels,talks,walks and looks human. The outer is every bit like you)and have the ride of your life.

There are different story lines going on in the park at a time but they all gradually piece together as the perfect form of entertainment for the guests (this includes you,the filthy rich you).At the end of each story line which is mostly marked by the hosts’ death,their memories are erased and the story line is embedded in them once more..this will continue for a while till the host,the guest or both are exhausted.In the case this happens the host is embedded with a new story line and the guest gives another desire or one is carefully calibrated to suit their needs. The man in black who appears ever so often is one of the founders of the park..i will explain this part in season two.

This follows a cliffhanger from season 1 where the hosts turn against the guests and start hunting them down..what has happened???!!! Do you remember the old guy (Ford) standing in front of the guests talking to them right before the hosts turned?yes, that old guy..he is the engineer/creator behind the spectacular life-like hosts. The corporation owning the park tried to force him to retire but he was not going out without a fight. Its a shame he dies in the process.

Anyway,one of the hosts,Dolores has “woken up”. She recruits a number of hosts to fight off arriving Delos security forces, while looking for the key to the Valley Beyond (The weird symbol they drew and some had on the inner parts of their skulls), believed by the Ghost Nation to be a door to the next world (This, you’ll come to understand is a way out of the park into the real world).

Maeve(Thandie,the ‘madam’) was having flashbacks that she had a daughter and they were attacked and got separated. This memory is one of the stories that helps piece the other story lines together,and at times,as per her memory, is a story line for the man in black. She continues to search for her daughter, learning that there are other parks like West world.

William(The man in black) finds that Ford(The engineer/creator,the one giving the speech) has left him clues to find “the door”, a new game for him to play, during which he encounters his estranged daughter Emily, who blames him for her mother’s death. Delusional, William abandons Emily, thinking she is a host.

Dolores, with Bernard’s help, finds the Forge (The symbol leads them here..i guess Ford wanted them to find this place and destroy it) where memories from all the guests to the park have been kept. Bernard helps a number of hosts transfer their programming to a digital space. Dolores wants to wipe out the guests’ records, and seeks a means to kill them in the real world. With more Delos forces converging on the park to suppress the uprising, Dolores manages to fool them and escape the park to the real world, taking with her Bernard’s and a few other hosts’ cores. She recreates the Bernard host, as she expects she will need his help for the hosts to survive outside of the park, even if he is her enemy in that effort.

Okay,so to summarize, Dolores and Bernard find a lab and in this, is where the guests store their consciousness so they can be able to live forever. By this i mean, the guests don’t just visit the park to have fun, they also want to live forever, selfishly,so Ford had come up with ways to enable them to transfer most of themselves/consciousness into these ‘cores’. These cores are then put into hosts who may or may not resemble the guest and the guest is able to live long after death. We only know of one guest who has successfully gone through the process,William (the man in black). You have been wondering why he never dies?That is why. Oh,and Dolores manages to escape into the real world with Bernard’s consciousness (yes,Bernard is a host too).

You see Ford in a few scenes and you often wonder, ‘didn’t he die?’ yes, he did. He uploaded his consciousness too..from my understanding,he is in the ‘cloud’ that is why he can infiltrate Bernard’s system.